The Biscuit Barrel sketch group were participants of the Inspiring Enterprise project and are going from strength to strength. 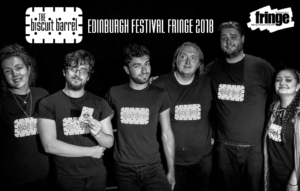 The Biscuit Barrel is an outrageously hyperactive sketch group, who clocked in fifty-eight sketches in the space of an hour at last year’s Fringe; the highest sketch-rate at the festival no less! Best described as ‘the speed of the internet put on a stage’, at a time where online comedy attempts to speed ahead of live performance, the Barrel take one back for the theatre!

As they prepare for our limited run at the Brighton Fringe in May, The Biscuit Barrel has also started to produce weekly online shorts for the small online comedy streaming service Punkanary.